When families or individuals are struggling financially but make more than the average family income in their county, they may wish to consider Chapter 13 bankruptcy. A Chapter 13 bankruptcy allows the filer to keep their assets in exchange for a repayment plan between the next 3 and 5 years. If you are interested in learning more about your bankruptcy options, the Law Offices of Michael D. Pinsky, P.C. can help. Contact our office today to discuss your situation with an experienced Chapter 13 bankruptcy lawyer.

Who is eligible for Chapter 13 bankruptcy?

Only individuals (not corporations, LLC’s or partnerships) with ‘regular income’ whose unsecured debts are less than $419,275 and whose secured debts are less than $1,257,850 are eligible for relief under Chapter 13. Only debts that are noncontingent and liquidated in amount are included. For example, if you’ve been in a car accident and you’ve been sued for $5,000,000 in damages in a case that hasn’t yet gone to trial or settled, that $5,000,000 does not count toward the debt limit totals.

How much of my debt do I have to repay in Chapter 13?

In Chapter 13 bankruptcy, you propose a plan to repay debts. Chapter 13 debtors are required to commit their “projected disposable income” to a repayment plan over a period of between 3 years and 5 years. The “applicable commitment period” for a Chapter 13 plan is determined by the means test, which is discussed further below.

Under Bankruptcy Code § 1325(b)(4), if a debtor’s “current monthly income” under the means test formula is greater than the median income for the debtor’s household size in New York, the commitment period is 5 years. Otherwise, the period is 3 years. A debtor with a commitment period of 3 years may elect to enlarge the plan period to up to 5 years if necessary to accomplish the debtor’s goals under the plan.

With the exception of past-due payments owed on secured claims for the property you are keeping (like your home) and on claims entitled to a priority in payment, plan payments in the Southern District of New York are not determined based on what you owe. Holders of allowed unsecured claims share Chapter 13 plan distributions after paying chapter 13 trustee fees, domestic support obligations, attorney’s fees, recent taxes, past due mortgage installments, car payments, etc.

You can think of this in terms of a pot of money that is left over after payment of priority and secured arrearage claims. An unsecured creditor’s share is determined by the size of its claim as a percentage of the money left over in the pot after the above-mentioned priority and secured claims have been paid. The percentage distribution on unsecured claims such as credit cards and medical bills can vary from very low to as high as 100%, depending on the number of different kinds of claims, the size of a debtor’s monthly plan payments, and the length of the plan. There’s more to it than this, but this is a pretty good approximation of how it works.

The Chapter 13 plan is administered by a trustee. Unlike in Chapter 7 bankruptcy, the trustee in a Chapter 13 case does not have the duty or power to sell assets or to sue to recover avoidable transfers. Rather, the Chapter 13 trustee is a federal court authorized collection and distribution agent. This agent has the duty to appear and be heard on the confirmation or modification of the Chapter 13 plan (and on paper at least, on the value of property subject to a lien). They may seek to convert the case to another chapter or dismiss the case as they deem appropriate. The decision on such matters in the Poughkeepsie Division of the Southern District of New York always rests with the bankruptcy judge.

Should I file a Chapter 13 case?

The most common use of Chapter 13 bankruptcy in the Hudson Valley is to avoid foreclosure by attempting to modify a home mortgage. Note that the purpose in filing a Chapter 13 case must be a bankruptcy purpose, that is, to reinstate secured debt or to discharge personal liability on debt. With that proviso, the Loss Mitigation procedures established by the U.S. Bankruptcy Court for the Southern District of New York afford debtors a valuable tool for avoiding the foreclosure of a mortgage on their primary residence.

Since the 2005 amendments to the Bankruptcy Code, chapter 13 (rather than chapter 7) may also be required for certain debtors based on “current monthly income” (or “CMI”), as determined by a congressionally mandated formula. CMI is neither current nor monthly and is based in part on a debtor(s) income, excluding Social Security benefits, in the 6 calendar months prior to the month in which the case is filed. If household income in that 6-month look-back period exceeds the median income for a debtor(s)’ household size in New York as determined by the Census Bureau, there is a complex formula used to determine CMI. Chapter 13 is indicated as the appropriate form of bankruptcy if the means test results in a “presumption of abuse”. An attempt to seek relief under chapter 7 with a presumption of abuse shown by the means test will result in a motion to dismiss is filed by the United States Trustee. Rather than suffer dismissal, the debtor in this situation can convert the case to chapter 13.

What is the difference between Chapter 13 and Chapter 7 for filers?

Chapter 13 debtors whose cases were originally filed under chapter 13 have the absolute right to dismiss their case, without the necessity of a hearing, absent bad faith.

How much do I pay under Chapter 13 bankruptcy?

Subject to certain limited exceptions, all of the Chapter 13 debtor’s property as of the commencement (filing) of the case constitutes ‘property of the estate,’ along with earnings or other property received after filing and during the pendency of the case (think, e.g., personal injury settlements, inheritances, and marital property settlements, after exemptions). Bankruptcy Code §§ 541 and 1306. Chapter 13 debtors must commit enough of their non-exempt property to fund the chapter 13 plan so that creditors receive at least as much in chapter 13 as they would have received if the debtor had instead filed for relief under chapter 7. Bankruptcy Code § 1325(a)(4).

Priority claims ordinarily must be paid in full under the chapter 13 plan. Bankruptcy Code § 507 lists claims in the order of their priority. First are claims for domestic support obligations, i.e., separate maintenance (alimony) and child support. Next are expenses of administration, such as attorneys’ fees for services rendered and not covered by a pre-filing retainer agreement. And in consumer chapter 13 cases, the next relevant priority claims are for certain taxes. To be confirmable, a chapter 13 plan must propose to pay priority claims in full over the life of the plan, unless the creditor(s) holding such claims agree otherwise. Bankruptcy Code § 1322(a)(2).

Can I keep income tax refunds if I file for Chapter 13?

In the Southern District of New York, and subject to available exemptions, a debtor may retain up to $1,500 in tax refunds each year during the plan period. In a jointly filed case (married couples only), the debtors may retain a total of $3,000 in tax refunds annually. Refunds beyond this amount must be paid to the chapter 13 trustee. Failure to provide the chapter 13 trustee with copies of tax returns and excess refunds during the plan period will result in the trustee filing a motion to dismiss the case.

As in chapter 7, chapter 13 debtors may file a motion to avoid the lien of a judgment on their homestead if the judgment lien interferes with the debtor’s homestead exemption. Unique to chapter 13, however, is a debtor’s ability to strip off an entirely unsecured junior mortgage lien from the debtor’s home. If the balance of senior liens (such as a first priority mortgage) exceeds the value of the debtor’s primary residence, a chapter 13 debtor may file a motion to (i) value the property and the liens on the property; and (ii) seek an order determining that a junior mortgage lien is entirely unsecured and is void, subject to the debtor completing payments and obtaining a discharge under the chapter 13 plan.

For decades, the Law Offices of Michael D. Pinsky, P.C. has represented individuals, families, and businesses across various bankruptcy matters. If you are considering your bankruptcy options and are interested in learning more about your Chapter 13 bankruptcy eligibility, contact our office today to schedule a consultation. 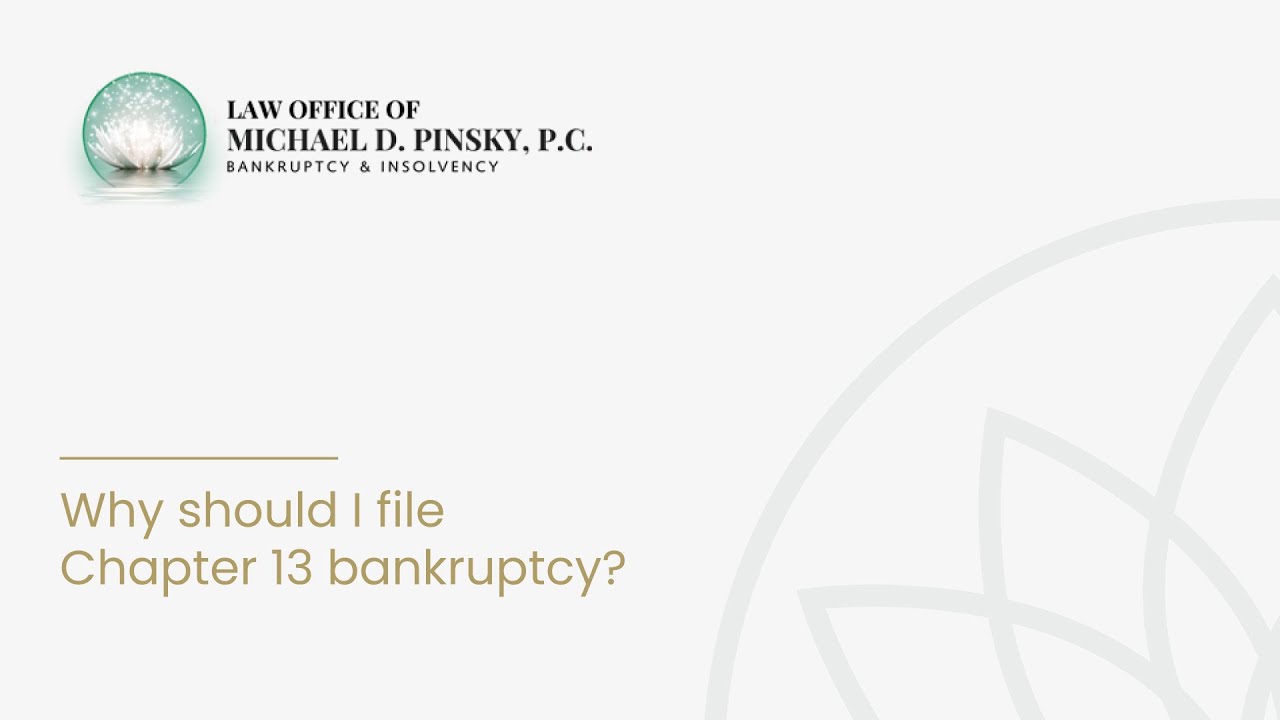